After I have already given general information about Breathing and Health, I would like to be more specific here and introduce an important tool for good breathing. I became aware of the Frolov Breathing Trainer in 2003. How the breathing trainer exactly works and what effect can be achieved with it, will be described in the following.

In 2003, I met the drummer Yannis in Athens. He is still working for us in our Professional Program. In addition to studying percussion at Berklee College of Music, Yannis had a career as a member of a special military unit and was trained on all terrains in this context.

During our first conversations, Yannis quickly realized that optimizing my health was an important part of my life. He asked me if I knew about the Frolov Breathing Training and told me the story of how he got in touch with this training: in the Himalayas in Nepal at an altitude of over 4000 meters.
Yannis was in the Himalayas with his unit for a high altitude training, where they met an elite Russian unit. A daily ritual of the Russian unit was a breathing training with the Frolov breathing trainer. As a result, the Russian troops had a significantly shorter adaptation time to oxygen deprivation and were able to work better and longer under hypoxia.

The breathing trainer developed by Professor Vladimir Frolov (1938-2009) consists of a cup, an inner container, a lid with holes, a breathing tube, a mouthpiece and a measuring cup and combines the positive effects of hypercapnia and hypoxia. 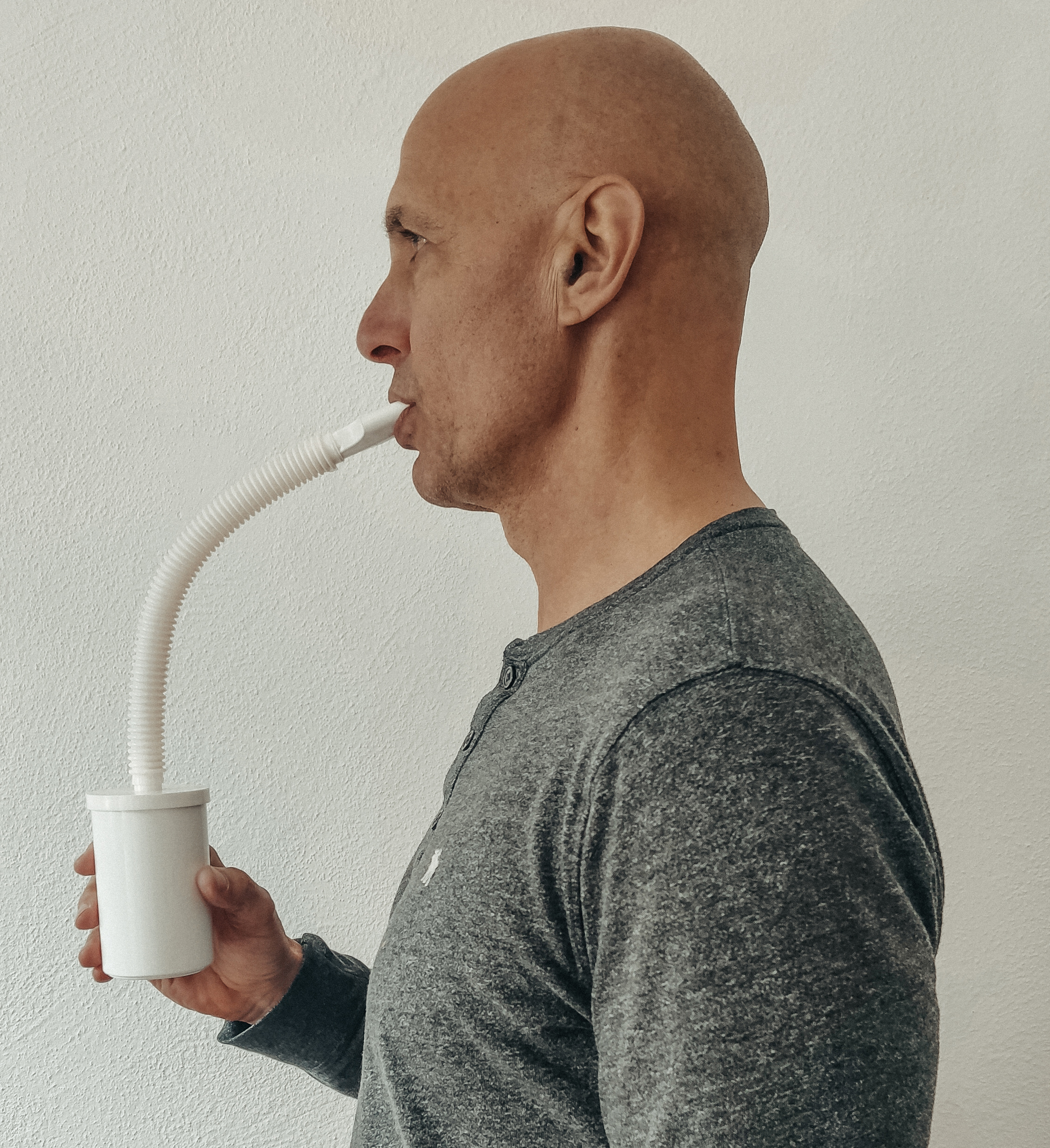 Breathing training with Frolov – not only for elite units

As described in the instructions for the device, you should follow a beginner’s course that lasts four to six weeks. The daily training time is very manageable with only a maximum of ten minutes.

For the training, the container is filled with 10 ml of water at the beginning. Then you should inhale for 2 seconds and exhale for 5-10 seconds. This is repeated for a maximum of ten minutes.

Now what happens during this exercise?

Almost all of our cells use oxygen for their metabolism. Thus, the whole body breathes. Breathing exercises have been used as a remedy for thousands of years.

They help with diseases of the respiratory organs, the circulatory system, the nervous system and they increase physical and mental performance.

While performing the exercises with the breathing trainer, the body endures hypoxia training, just as if you were in the mountains where there is less oxygen in the air. This low oxygen air is breathed by the inhabitants in the mountains who statistically live significantly longer and healthier.

Research proves that with this type of breathing the arterial blood pressure, circulation, metabolism and the whole condition of the nervous system is improved. The aging process slows down and the energy potential of the body increases two to three times.

I have even wondered whether the breathing trainer might not also help with Long Covid symptoms such as shortness of breath. British health experts, for example, have developed a special breathing training for Long Covid patients. An investigation into whether training with the Frolov trainer can be similarly helpful could yield interesting results.

How often and how long should I practice?

In the beginning, I recommend practicing daily by doing the beginner’s course, and then gradually increasing the amount of water and thus the resistance when breathing, as well as the length of exhalation. Also, increase the training session to 20 to 30 minutes.

I currently practice for 20 minutes with 25 ml of water and my exhalation length varies from 30 seconds to 60 seconds depending on the day.

As described in a previous blog, my resting heart rate is below 40 beats per minute and my breathing rate at rest is at a maximum of 6 sequences. This is in large parts due to this exercise that I have been practicing for years.

If you want to work with the Frolov breathing trainer, you should determine the following data:

These numbers can then be determined again and again at longer intervals and thus progress can be checked.

I look forward to your results which you are welcome to send me.

Have fun trying them out!